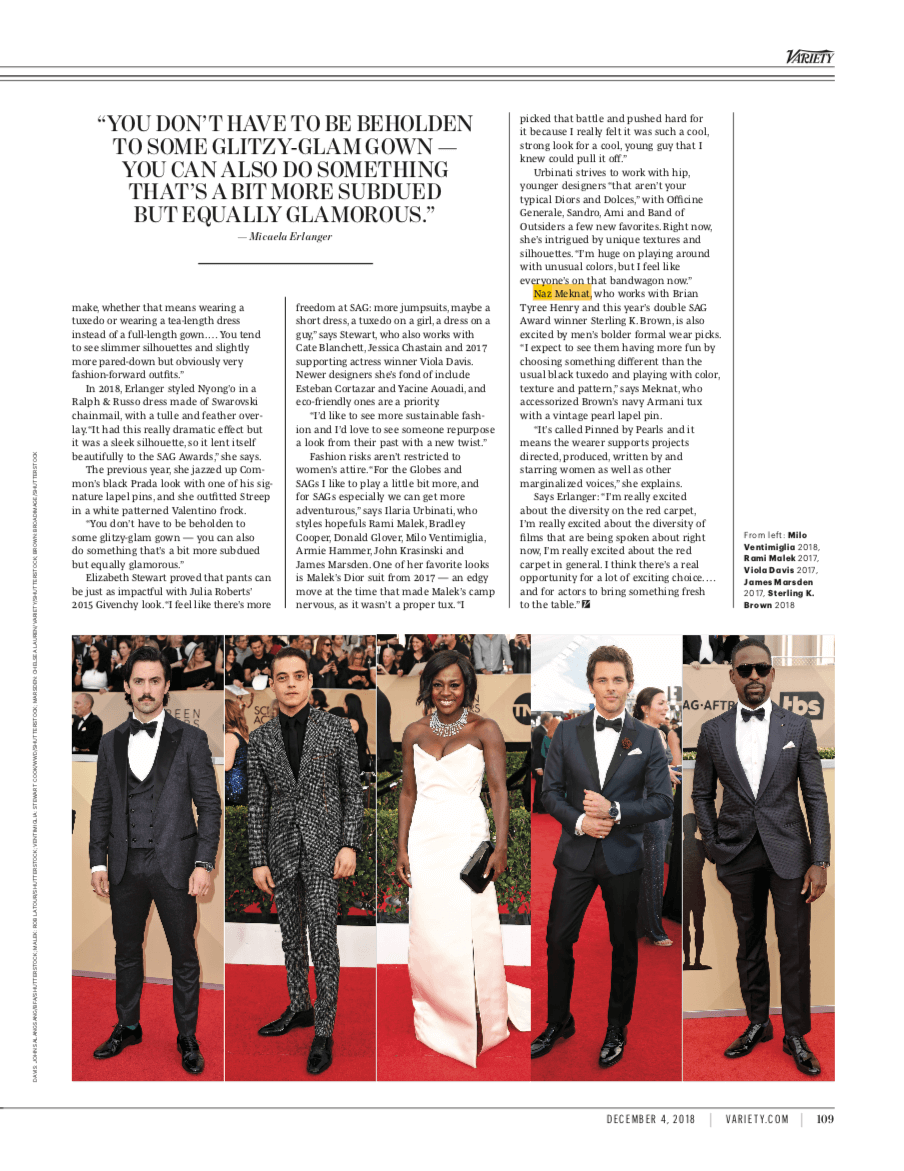 2018’S SAG AWARDS followed the Golden Globes fashion “blackout” protesting gender inequality, and the presidential election loomed over awards season the year prior. Stronger, sequined and gender-neutral looks took the stage, in black, suffragette white, soft pink and metallic tones, but next year’s awards show red carpets are looking brighter. “I think it should just be more fun — these are dark times that we’re living in,” says Erin Walsh, stylist to Thandie New- ton, Alison Brie and Maggie Gyllenhaal.“I was talking with somebody recently about how great some of the film content is this year and was wondering if it’s a reflection of the times that we live in. So if that’s the case, then shouldn’t our clothes bring a lit- tle bit of light and levity into the world?”

Walsh would love to see bold texture and print choices, designers of different ori- gins and less-safe options this year.“I feel like people might experiment more,” she says, while noting the SAG Awards have a distinct tone.“Because it’s an actors-be- ing-honored-by-actors situation, it’s not an occasion where you want a Met Gala or Oscars-esque dress. It’s not about overpow- ering so much as celebrating other actors. It’s about the group as a collective.”

Newton’s Western-themed Schiaparelli dress in 2017 paid homage to “Westworld.” “It was a story in a dress! A sparkly cou- ture story,” says Walsh, who believes that women today want to feel powerful.“It’s about each woman, what makes them feel their best and their most powerful and sexy and strong.... So, for some people, that might be sequins, for others it might be a white Brandon Maxwell suit.”

Micaela Erlanger, whose clients include Lupita Nyong’o, Meryl Streep, Constance Wu and Common, also feels 2019’s awards fashion will celebrate strength and empowerment. “Instead of the strong statement that was so incredible with everyone coming together and wearing black, I think that it’s going to be brighter,” she says.

For her, the SAG Awards are an occasion to showcase her clients’ personalities and take risks, as actors are among their own.

“There’s a little bit more opportunity in terms of the fashion choices that you can make, whether that means wearing a tuxedo or wearing a tea-length dress instead of a full-length gown.... You tend to see slimmer silhouettes and slightly more pared-down but obviously very fashion-forward outfits.”

In 2018, Erlanger styled Nyong’o in a Ralph & Russo dress made of Swarovski chainmail, with a tulle and feather over- lay.“It had this really dramatic effect but it was a sleek silhouette, so it lent itself beautifully to the SAG Awards,” she says.

The previous year, she jazzed up Com- mon’s black Prada look with one of his sig- nature lapel pins, and she outfitted Streep in a white patterned Valentino frock.

“You don’t have to be beholden to some glitzy-glam gown — you can also do something that’s a bit more subdued but equally glamorous.”

Elizabeth Stewart proved that pants can be just as impactful with Julia Roberts’ 2015 Givenchy look.“I feel like there’s more freedom at SAG: more jumpsuits, maybe a short dress, a tuxedo on a girl, a dress on a guy,” says Stewart, who also works with Cate Blanchett, Jessica Chastain and 2017 supporting actress winner Viola Davis. Newer designers she’s fond of include Esteban Cortazar and Yacine Aouadi, and eco-friendly ones are a priority.

“I’d like to see more sustainable fashion and I’d love to see someone repurpose a look from their past with a new twist.”

Fashion risks aren’t restricted to women’s attire.“For the Globes and SAGs I like to play a little bit more, and for SAGs especially we can get more adventurous,” says Ilaria Urbinati, who styles hopefuls Rami Malek, Bradley Cooper, Donald Glover, Milo Ventimiglia, Armie Hammer, John Krasinski and James Marsden. One of her favorite looks is Malek’s Dior suit from 2017 — an edgy move at the time that made Malek’s camp nervous, as it wasn’t a proper tux.“I picked that battle and pushed hard for it because I really felt it was such a cool, strong look for a cool, young guy that I knew could pull it off.”

Urbinati strives to work with hip, younger designers “that aren’t your typical Diors and Dolces,” with Officine Generale, Sandro, Ami and Band of Outsiders a few new favorites. Right now, she’s intrigued by unique textures and silhouettes.“I’m huge on playing around with unusual colors, but I feel like everyone’s on that bandwagon now.”

Naz Meknat, who works with Brian Tyree Henry and this year’s double SAG Award winner Sterling K. Brown, is also excited by men’s bolder formal wear picks. “I expect to see them having more fun by choosing something different than the usual black tuxedo and playing with color, texture and pattern,” says Meknat, who accessorized Brown’s navy Armani tux with a vintage pearl lapel pin.

“It’s called Pinned by Pearls and it means the wearer supports projects directed, produced, written by and starring women as well as other marginalized voices,” she explains.